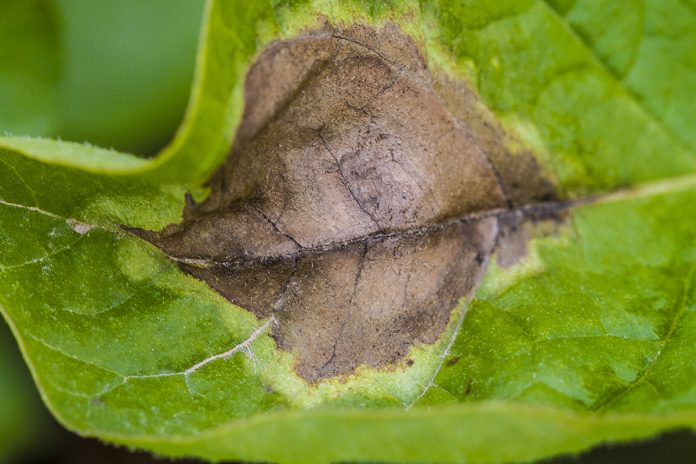 Didier Andrivon, Research Director (Senior Scientist) at INRA provides an absorbing account of the disease, potato late blight and its re-emergence and explains why it is a major reason for pesticide use in arable crops

The first outbreak of late blight in Europe was spotted in Belgium in 1844 (Bourke, 1964) – that is, 175 years ago. The pathogen became epidemic the next year, and caused generalised famine, with outstanding consequences: almost 1.5 million people died in Ireland alone, another 2 million emigrated to the New World within a span of five years, and the food shortages everywhere in Europe scoured the onset of the 1848 revolutionary movements that shook the continent.

This catastrophic event had also very far-ranging scientific consequences. The quest for the causes of the disease led to the formulation of the ‘germ theory’ – that is, the realisation that microbes could be pathogenic. The hygiene consequences of this theory continue to fuel our vision of microbial diseases. On the other hand, the observation that fields close to zinc and copper factories widely escaped the disease formed the basis of the discovery of the first industrial pesticides, namely the Bordeaux mixture, which are still in widespread use today in both conventional and organic cropping systems.

Oddly enough, late blight is not a disease of the past. Despite almost two centuries of scientific and operational research, the cost of late blight (losses to the pathogen and cost of control measures) exceeds €1 billion a year in Europe alone (Haverkort et al., 2008). Late blight remains a major reason for pesticide use in arable crops – with up to 20 sprays a year in severe blight pressure years (those with wet and cool springs and summers), according to Euroblight survey data. The worldwide expansion of the potato and increasing international trade make late blight a global problem.

Why late blight has not gone away

Why has late blight not gone away, and why is it rather expanding? In other words, why is it now regarded as a re-emerging disease? Several factors are involved (Fry et al., 2015).

The epidemiovigilance networks, such as ProMED-Plant, now spot the disease in areas where it was rare or absent before (in particular in Asia, but also in many parts of sub-Saharan Africa), and also highlight a higher prevalence in ‘historical’ areas of its distribution. The reinforcement of international trade favours rapid migrations, within the European continent, as well as between continents, of new, aggressive pathogen genotypes (e.g. Fry et al., 1992; Cooke et al., 2008; Njoroge et al., 2016).

The late blight pathogen, Phytophthora infestans, is remarkably diverse. This might well be a consequence of its large genome, with rapid duplication of genes (Haas et al., 2009). As a consequence, the genetic structure of local pathogen populations, and hence their pathological characteristics, change utterly rapidly, and in unpredictable ways (see figure).

Climate change reinforces the concerns about the dangers for crop production caused by late blight, with earlier outbreaks and greater expansion of susceptible crops due to temperature increases (Lehsten et al., 2017; Hansen et al., 2015). For instance, the first late blight symptoms are now seen in potato crops about a month earlier than in the 1970s in Scandinavia.

Recent moves towards a general reduction in pesticide use has led to a marked withdrawal of large-spectrum fungicides. The current restrictions on pesticide use and approval, under the terms of EU Directive 2009/128/EC on the sustainable use of pesticides, and the slow innovation rate for alternatives on the market, make these concerns very acute.

Integrated Pest Management (IPM) strategies rely on combinations of control means – resistant cultivars, biocontrol solutions, prophylaxy (seed certification, removal of refuse piles and leftovers from previous crops), and targeted application of pesticides using adequate decision support systems designed to predict epidemic risk periods. We currently lack key information about some of these means (for instance, the optimal conditions to efficiently use plant defense stimulators), and we also need to adjust most of them (cultivar choice, DSSs) to local pathogen populations.

There is still, therefore, a considerable margin for improvement, and intense research efforts to make before late blight can, finally, become a disease of the past.