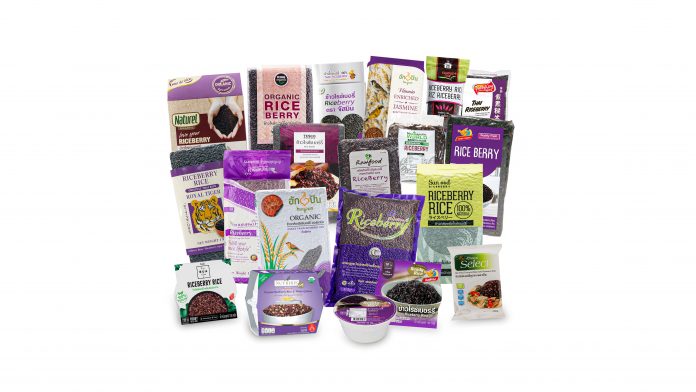 Riceberry rice, enriched with a full-spectrum of antioxidants, chemoprotective compounds, micronutrients, and dietary fibre can help unlock your genetic potential for well-being, in the view of Professor Dr Apichart Vanavichit, Director at the Rice Science Center in Thailand

Now marks a decade of the best known Riceberry rice for its super-nutrient with a great after-taste of whole grain rice. As the outcome of a cross between the famous Thai Jasmine rice and a photoperiod insensitive purple rice, Riceberry rice is a long, slender, purple grain with a non-sticky and distinctive aroma. So far, Riceberry rice has successfully convinced consumers to change their mindset by enjoying eating and embracing whole-grain pigmented rice’s nutritional benefits. Consuming whole grain can provide a sustainable solution to lower the incidence of non-communicable disease (NCD) in modern lifestyles.

As the world population is increasing exponentially to nearly 10 billion people in the year 2050, there will be more incidence of non-communicable diseases (NCDs) such as obesity, diabetes (T2D), cardiovascular disease (CVD). T2D has increased rapidly from 6.5% in 2015 to 10.7% in 2030, with the most significant increase was found among the elderly population (72%). There are strong links between consuming high glycaemic index foods, a sedentary lifestyle and NCDs(1).

Purple rice bran contains mixtures of peonin-3-glucoside, cyanidin-3-glucoside and delphinidin-3-glucoside anthocyanin, which help impart purple, blue and red colours on pigmented rice. The bran is also rich in other compounds, including dietary fibre, proteins, lipids, phytosterols, vitamins, minerals, antioxidants and anthocyanin. Additional compounds – polyphenol, tannin and catechin in Riceberry rice were three to 10 times higher than regular brown rice. Most impressive are the high vitamin B1, B2, B3 and B9 in dark purple Riceberry bran. Notably, per 100g of Riceberry rice, there is 48 µg folate (vitamin B9). Chemoprotective compounds have become a subject of research to discover new functional roles in lowering the risk of NCDs for consumers.

Chemical extraction of Riceberry bran uncovers unusual chemoprotective compounds, including beta-carotene and lutein, which are absent in white rice. Apigenin, phytosterols and triterpenes like lupeol confer chemoprotective properties in human cell lines, including Caco-2 (colon cancer) and MCF-7 (breast cancer), with the most notable effects being on the HL-60 cell line(3). Gramisterol specifically has been shown to prevent acute myelogenous leukaemia (AML) and protect the dysfunctional immune system of leukaemic mice(4).

In addition to cancer prevention, studies reveal that supplementing Riceberry bran (up to 41%, w/w) in streptozotocin-induced diabetic rats fed with a high-fat diet can reduce hyperglycemia, hyperlipidemia, oxidative stress, and inflammation as proven by effects on biochemical parameters such as blood glucose and insulin levels. It is proposed that these are the effect of increased antioxidant levels on insulin tolerance and reduced B cell apoptosis which subsequently improves liver and pancreas function(5).

Although rice bran contains 8-10% oil, it is a significant source of highly lipid-soluble antioxidants such as gramisterol, gamma oryzanol, vitamin E, beta-carotene and lutein. Hyperlipidemia is a major risk factor for heart disease and a symptom of many metabolic disorders, including diabetes and obesity. Studies have demonstrated that the use of Riceberry bran oil (RBBO) raises the levels of higher-density lipoprotein (HDL or good cholesterol) and decreases low-density lipoprotein (LDL or bad cholesterol) in streptozotocin-induced diabetic rats. A specific study revealed that after 12 weeks, RBBO significantly decreased malondialdehyde and restored superoxide dismutase, catalase, glutathione peroxidase, coenzyme Q10 and Oxygen Radical Absorbance Capacity (ORAC) levels in diabetic rats(6).

While most of the research has occurred on the lab bench, the socio-economic benefits of Riceberry rice are undeniable. The organic purple rice boasts an unprecedented 81 antioxidants, and as the medical research field expands, there’s potential to exploit these in a therapeutic context – elevating it from a nutraceutical to first-line treatment. Riceberry rice has been used to develop over 66 products. Beginning in the year 2013, Riceberry rice products have seen a rise in sales beginning in 2013, outperforming Thai Hommali Rice (THM) between 2017 and 2021. The Riceberry rice farmer stands to gain an average of 10-20 THB more per kg of Riceberry rice sold. The return of investment for this farmland is estimated at 6,500 Thai Baht (THB) per Rai with the benefits averaging 32,500 THB per season. ($1,354  per hectare). In total, the return of research investment was estimated to be approximately 600 million Thai Baht.

With its appealing taste and vibrant purple colour and the previous extensive research into its biochemical properties and potential medical benefits, Riceberry products are so successful in the market. To date, there are 65 research projects, 39 patent applications, and 18 endorsed patents focused on Riceberry rice. In 2019, Kasetsart University picked the Riceberry rice integrated projects as the winner of a Platinum award for topping socio-economic impact in Thailand. Non-communicable diseases such as type 2 diabetes and its cohorts are the main beneficiaries of Riceberry rice. However, as previously mentioned, there remains plenty of work to develop an effective and palatable supplement to complement the current diet therapy approach. Riceberry rice has substantially impacted product innovation, economics and Thai society, promising to connect organic cultivation to healthy food and cosmetic products both now and in the future.

Riceberry rice: The next step

These projects have been supported by NSRF via the Program Management Unit for Human Resources and Institutional Development, Research, and Innovation (Grant No. B16F630088).