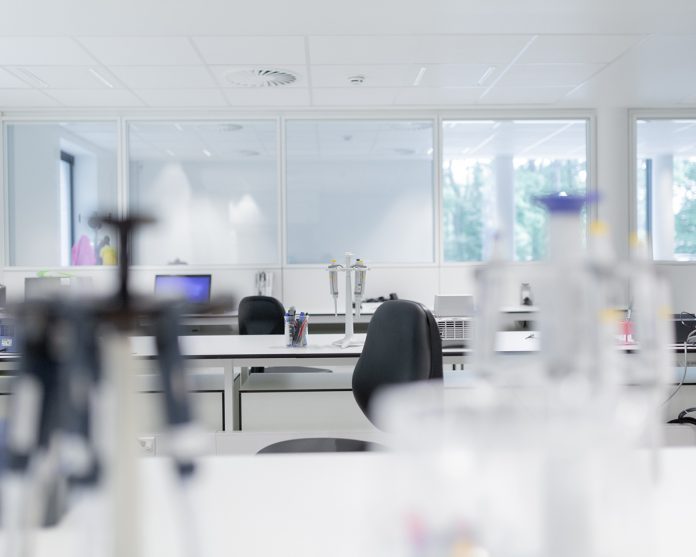 Isabelle Ote and Valérie Barette, Project Leaders at Belgian immunotherapy expert Imcyse, discuss its next phase of growth, and how to apply ImotopeTM technology to the treatment of MS

With its Imotope™ technology, Belgium-based Imcyse is working on a new approach to fighting serious immune diseases. Since spinning out from the Catholic University of Leuven, Imcyse’s reputation has continued to grow in the European pharmaceutical landscape by pioneering a radically new treatment option that could stop the progression of autoimmune diseases and potentially provide a cure.

Having hit significant milestones over the past year including starting a Phase two study in Type 1 Diabetes (T1D) initiating a research and collaboration agreement with Pfizer in Rheumatoid Arthritis and closing a financing round raising an additional €21m, the Company is now preparing for the next phase of growth and advancing its next promising candidate for the treatment of Multiple Sclerosis (MS) forward into the clinic.

Preparing foundations for the next phase of growth

To enable strong growth, Imcyse recently relocated to new purpose-built premises in Liège. The new R&D centre features customised labs to advance its scientific programs and boost pipeline progress as well as the expansion of the Imotope™ platform to new indications and therapeutic areas.

Imcyse’s robust pipeline currently consists of one clinical and four pre-clinical programs, all of which are expected to enter the clinic by 2024.

The Company’s most advanced drug is the insulin-based candidate for Type 1 Diabetes, IMCY-0098, which is recruiting patients for the IMPACT study after having successfully completed the EXALT study that found the drug to be safe and showed encouraging signs of clinical effects. The full results from IMPACT are anticipated in the second half of 2023.

The Science behind it: Advancing the battle against autoimmune diseases

In autoimmune disorders, the body’s immune system begins to mount a response against self-proteins leading to an attack that destroys healthy tissue, ultimately resulting in organs being damaged. In MS, for example, the body can begin to react to the proteins which make up the protective coating (myelin sheath) around our nerves and begins to attack the myelin, exposing the nerves and causing damage. 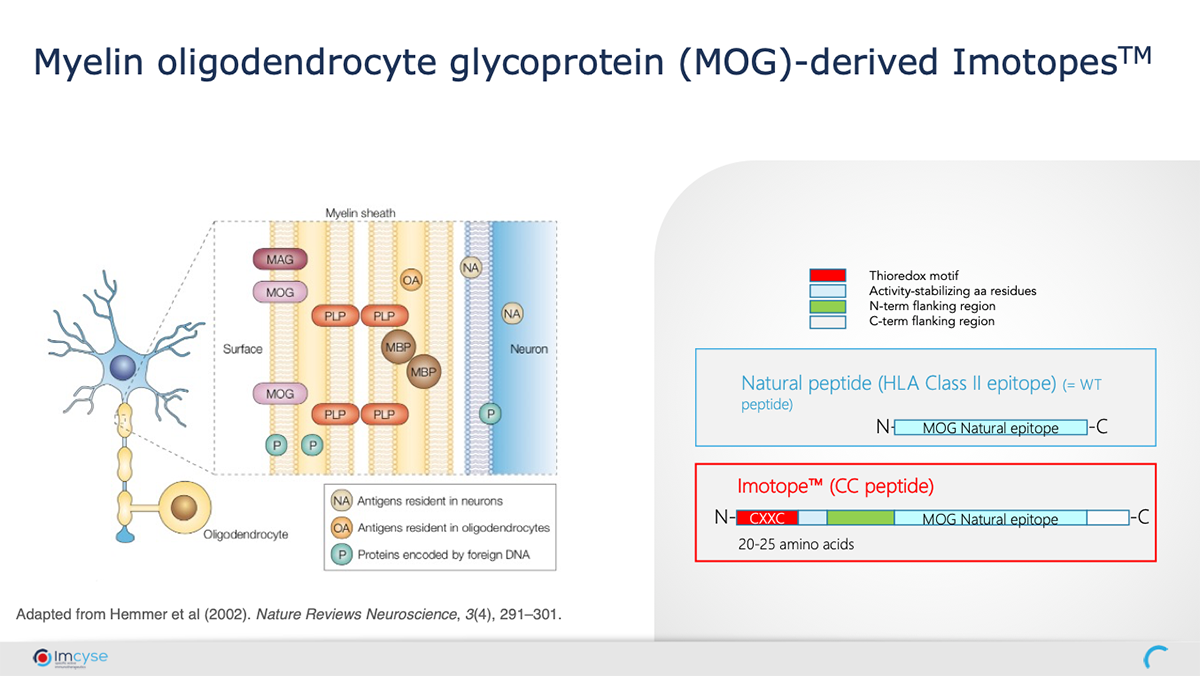 Imcyse’s approach has several advantages including safety, specificity, and memory. As Imotopes™ are derived from the protein, which causes the disease, they are disease-specific, enabling the rest of the immune system to function in an unaltered manner. This is important as we expect that Imotopes™ will be safer and have the potential to treat auto-immune diseases without affecting the normal function of the immune system as is the case with most other approaches. As with many vaccines, Imotopes™ also induce a memory response so that the treatment effect is long-lasting and does not require daily treatment. And finally, Imotopes™ are easy to manufacture.

Imotopes™ are modified synthetic peptides which break the chain in the disease pathway. A key step in this cascade is when a cell called an Antigen Presenting Cell (APC) when presenting the disease-causing protein, stimulates T cells (autoreactive T effector cells) that in turn cause tissue damage. Imotopes™ stop the attack by stimulating the body to induce specific cells called cytolytic CD4+ T cells (cCD4). These cells recognise the APCs involved in the disease pathway and eliminate them. Importantly, these cCD4 T cells only affect the APCs that are specifically involved in the disease pathway and do not affect other APCs or other immune cells which are involved in protecting against infection. This is referred to as “antigen specific therapy.” Therefore, the Imotopes™ have the potential to be very safe while being a truly disease-modifying therapy. If successful, this approach could break the aberrant immune pathway and stop an autoimmune response before significant tissue damage has occurred, potentially providing a cure for autoimmune diseases without impairing immune defence.

A more detailed description of Imcyse’s technology is available in a previous Open Access Article. (1)

Imcyse’s next indication, Multiple Sclerosis, is the most common neurological disease which attacks the central nervous system. MS induces damage to the proteins protecting the nerves, also called nerve sheath demyelination, which exposes the underlying nerves and can lead to paralysis. Symptoms include muscle weakness, weak reflexes, tremors, and muscle spasms. More than three million people globally are diagnosed with the disease including young adults, from 15 years of age. (2) Amongst them, women are twice as likely to be affected. The true cause of the disease is unknown, however, a combination of hereditary and environmental factors is believed to enable the autoimmune attack. (3)

In the last 15 years, the therapeutic landscape for MS has changed dramatically. Several drugs have been approved that reduce the chances of relapse in patients as well as slowing down the progression of the disease. However, new treatments which have a more favourable safety profile with fewer side effects and those that can slow or even stop the progression of the disease are needed.

Applying its innovative approach to MS, Imcyse has taken one of the epitopes of the Myelin oligodendrocyte glycoprotein (MOG), which is at the root of the disease and added a thioredox motif. The modified MOG peptide is turned into a drug called an Imotope™ which induces MOG specific cCD4 T cells.

Imcyse’s MS Imotope™ has shown promising results in several MS preclinical models demonstrating an immune response that supports the proposed mode of action and providing proof of concept. The drug was also able to substantially slow down the progression of the disease and if treatment is begun early enough, is able to stop the disease from establishing in the first place, leading to a potentially curative treatment.

Taking the MS Imotope™ into the clinic

In the early part of 2022, Imcyse will begin a clinical study, testing for the first time this new therapy in patients. The goal is to target patients within three years of their initial diagnosis and treat them during the early course of the disease before any substantial nerve or muscle damage has occurred. With this strategy, the Company aims to stop the progression of the disease and minimise the development of any possible long-term MS symptoms for the patient.

Patients will undergo a course of therapy comparable to a vaccination. To determine the most effective and safe dose, several doses will be tested. The study will recruit patients in specialist hospitals in Europe. Patients will be followed up for 9 months.

With two programs in clinical development by 2022 and a range of pre-clinical programs including major and rare indications, the first partnership with a leading global pharmaceutical company, Imcyse has created a multi-faceted development and commercialisation strategy. As a first step, the Company plans to continue developing its T1D and MS Imotopes™ to increase the amount of clinical data required to demonstrate the safety and efficacy of this novel approach. Looking forward, Imcyse hopes to bring several new and important medicines to market either themselves or through partnerships with pharmaceutical companies. To leverage the potential of the Imotope™ technology worldwide, Imcyse is also turning its eye to expanding its international market position with particular interests in the U.S.