On the contrary, fuel cell technology has been highly critiqued for their poor hydrogen fuel infrastructure, the complexity of design, high manufacturing and maintenance costs and inability to match the performance of EVs. So how does the system work? The fuel cell stack is connected to the electric motor which is connected, in turn, to the wheels. The fuel cell stack acts as a battery, providing electric power directly to the electric motor which then provides power to the wheels. Excess electric energy from the fuel cells is supplied to the battery, which uses the stored energy during uphill climbs or hard acceleration.

While FCEV technology is established, the question is whether the industry is ready to implement it? The answer is a resounding ‘yes’ as the global automotive market is ready and geared up to adopt a new energy segment vehicle in its portfolio; however, it will be a slow yet steady start.

Japan has been at the forefront of adopting alternative fuel technologies. The Japanese automotive market was the first to embrace HEV technology. The Japanese government and local OEMs have pushed to standardise the use of electrified powertrains, globally. At the same time, the Japanese government has been encouraging the use of hydrogen fuel technology for large-scale deployments and transport applications. Backing such intent, the government has invested $378 million to develop infrastructure and offers purchase incentives. Approximately $1 million will be spent on each hydrogen station, while purchase incentives will be provided until 2020.

According to recent Frost & Sullivan FCEV research, Japan will leverage the expertise of leading automakers Toyota and Honda to drive its leadership (along with Hyundai from South Korea) of the fuel cell systems market. Higher investments and funding of hydrogen refuelling stations will result in Japan and the U.S. – particularly the state of California – emerging as major adopters of fuel cell vehicles. 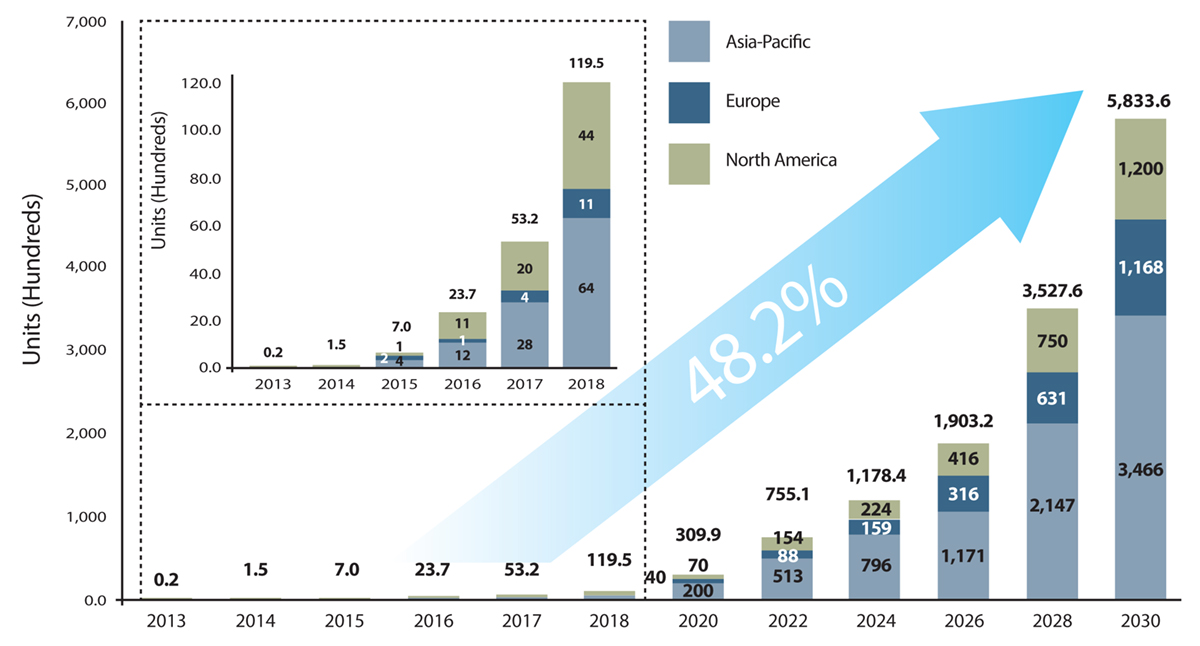 The global adoption of FCEVs in emerging markets will be driven by strong incentives and government policies that will boost consumer acceptance and higher private investments by companies seeking to establish a global network of fuel cell refuelling stations. In keeping with this trend, about 20 fuel cell car launches by leading OEMs are expected in global markets over the next five years. Asian OEMs with a first mover advantage are expected to dominate the market. For instance, unit sales of Toyota FCEVs are projected at 165,000 and Hyundai FCEVs at 148,000 by 2030.

About time for OEMs to launch FCEV models

Toyota and Honda lead the industry in fuel cell technology development. Toyota has achieved the highest power output while dramatically reducing the system’s price and size from previous fuel cell vehicles offerings, whereas Honda has pioneered a powerful and compact system that uses electric air turbo air compressors to produce an enhanced hydrogen and air mixture that generates the electricity required for propulsion.

Frost & Sullivan believes that the push for FCEVs is likely to start post-2020 when the subsidies for BEVs will phase out. With essential cost reductions and infrastructure in place, the growth post-2025 is expected to be exponential. Hyundai-Kia and the Honda group are expected to have the highest selling fuel cell vehicles due to their being offered as leasing options in California. More than 20 models of fuel cell cars are being launched globally, even as significant investments are being made to commercialise fuel cell stacks on cars.

Backed by government incentives, the Department of Energy in the U.S. targets having about 500,000 fuel cell cars on the road by 2030. In the meantime, with an eye on the Tokyo Olympics, the Japanese government is pushing hard for FCEVs and related infrastructure development with an order of 6,000 FCEVs and 160 stations by 2020.

The establishment of hydrogen infrastructure and positive government policies are, therefore, paving the way for OEMs to launch FCEV models.

Is there a clinch in the system?

OEMs need to overcome certain major challenges before fuel cell vehicles can be adopted at the same pace as EVs by the automotive mass market. These include:

According to Frost & Sullivan, the California Energy Commission and the European Fuel Development Programme (HyFIVE) have committed to fund the H2 network globally; the pie chart shows the FC technology being heavily funded (~$21 million in the U.S. and ~17 million in EU) by private companies in partnerships with OEMs. 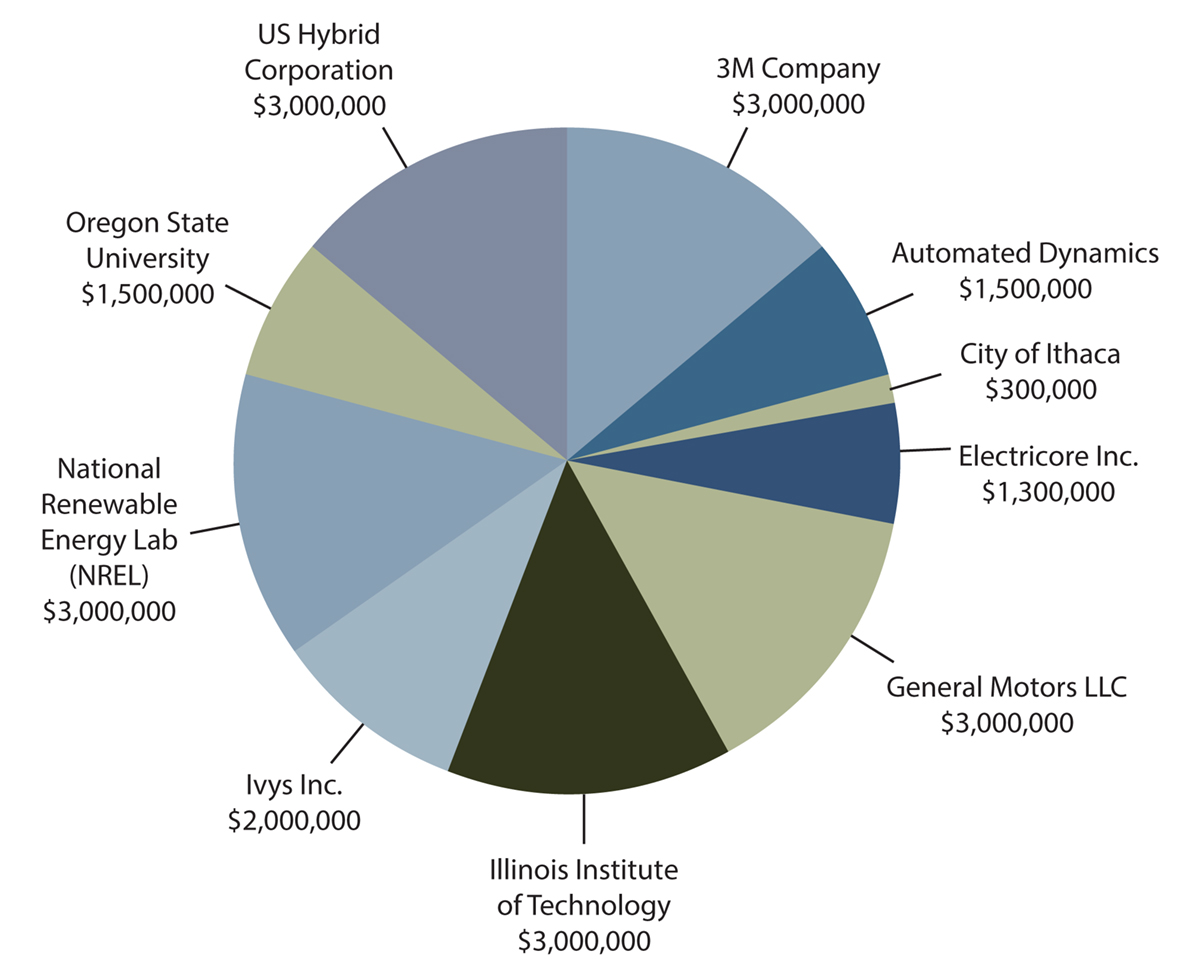 The cost of implementing a variable hydrogen pressure nozzle fuel station is about $750,000-$1 million for storage and generation, which have been the primary choking points in infrastructure expansion. The creation of a modular approach will be the key technology trend for hydrogen fueling stations in the U.S. as this will enable them to cater to commercial and passenger vehicles with variable pressures of 350–700 bar.

Companies and other industry entities and networks, such as Shell, Ricardo, Fuel Cell and Hydrogen Energy Association, Seven-Eleven Japan Co. Ltd, HyFIVE, Linde, California Fuel Cell Partnership, Ballard and UK H2 Mobility have partnered with OEMs to share their expertise in hydrogen production, fuel station network deployment and investment. The co-development of fuel cell stacks and optimisation of fuel cell systems will be crucial to commercialisation. 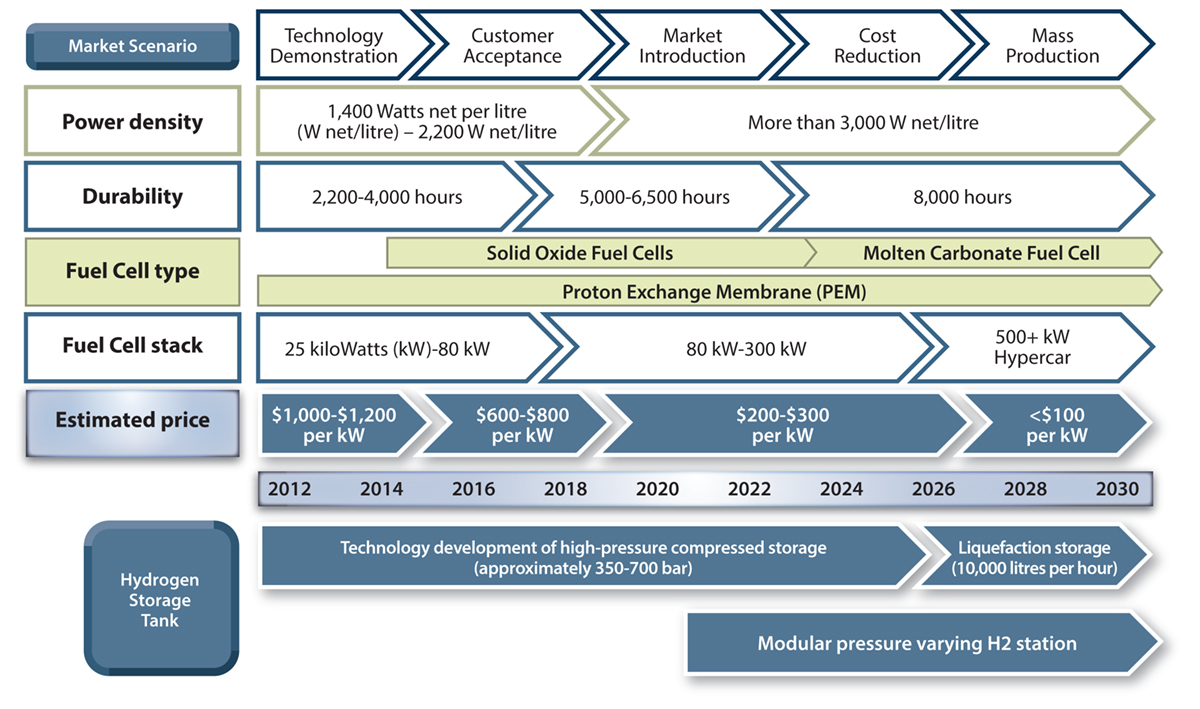 Currently, power density and price are focus areas for FC manufacturers bidding to make fuel cell passenger cars a market reality. FCEVs have about 3,500 hours of durability at various speeds while buses have surpassed the 2016 target of 18,000 hours to reach about 23,000 hours of durability. The U.S. Department of Energy aims to reduce the price of an 80 kW fuel cell stack system to about $40–$30. Along with reductions in the price of fuel cell stacks, efforts are also ongoing to lower the cost of hydrogen production to less than $2 per kilogramme using the proton exchange membrane (PEM) electrolysis method. Toyota and Hyundai pioneered PEM stack cells technology that reduce the overhead cost per unit and was reported to be about $50,000 in 2015. As production volumes increase, costs will reduce independent of the technology advancement and manufacturing process.

Over the next decade, an estimated $10 billion will be invested globally in developing hydrogen technology and infrastructure by a group of private investor companies in conjunction with auto majors Toyota, Daimler and BMW. The Californian government has approved an expenditure of $20 million annually on hydrogen station deployments with private companies have already invested close to $21.6 million at the end of 2017. OEMs such as Honda and GM are accelerating the march toward alternative propulsion through the co-development of fuel cell technology and the establishment of a manufacturing facility in Michigan, the U.S.

The two companies are making equal investments totalling $85 million in the joint venture. They plan to begin mass production from 2020, leveraging their integrated development teams and shared hydrogen fuel cell intellectual property to create more affordable commercial solutions for fuel cell and hydrogen storage systems. Such partnerships and investments have created a new platform for FCEVs to enter the market both through leasing options (Hyundai and Honda), as well as through direct sales and support (Toyota). 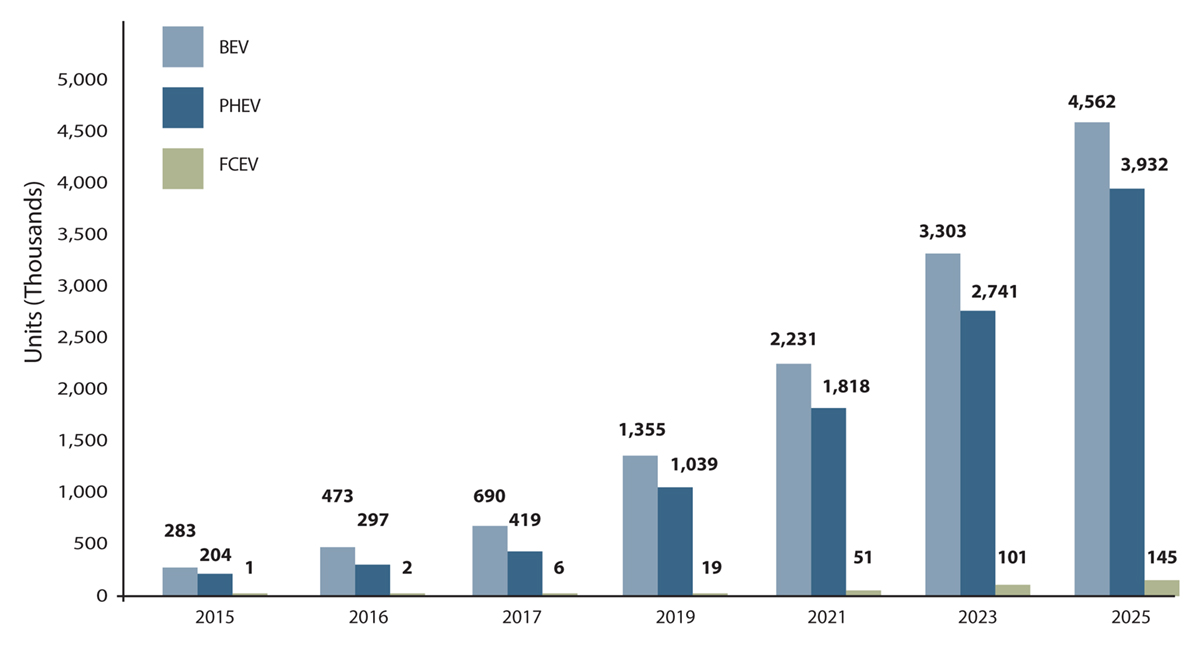 There is no denying that currently battery electric vehicles (BEVs) are ahead of FCEVs in the competitive stakes. To some extent, this is because, with only three FCEV models available in the global market, there is limited consumer awareness about their advantages. Fuel cell technology developers have attempted to address consumer apprehensions by proving their superior performance in terms of high mile range, better weight/volume, enhanced recharging/refuelling time and proven safety.