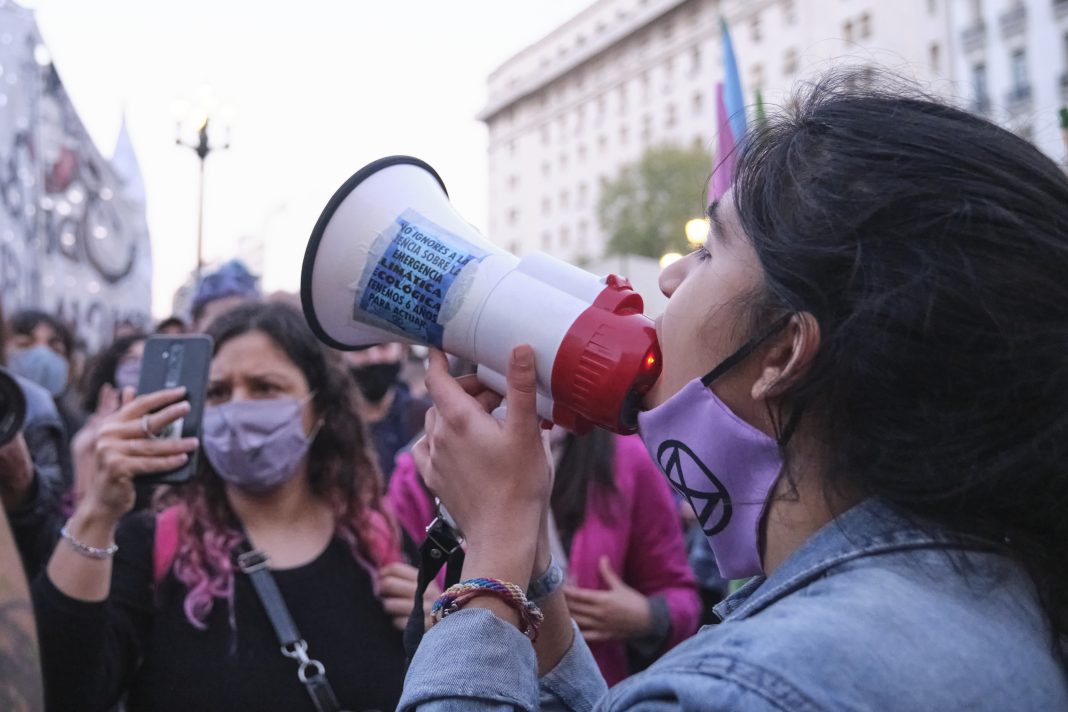 On International Women’s Day, we recognise the importance of listening to the voices and opinions of women in climate activism.

This is especially important for climate activists belonging to Indigenous or ethnic minority communities who have experienced the brunt of climate change due to historical injustice. Environmental feminism, or ecological feminism, is slowly growing as a frequently used term as we continue to learn how issues of ecocide occur under the feminist umbrella, too.

Acknowledging the roles women play in protecting the Earth, and women’s connection to nature, furthers our understanding of environmental problems, which can help us recognise how women’s oppression is linked with the unjustified domination or exploitation of nature.

As governments and world climate policies are still being dictated by male politicians and large businesses, we have lost our connection with nature to capitalist growth and exploitation of land.

So, in this article, we aim to recognise and appreciate the women and girls who are changing this dynamic.

Who are the five climate activists?

Advocating for the preservation of safe and sanitary drinking water for Indigenous peoples since the age of 8, Autumn Peltier is an Anishinaabe water-rights advocate, as well as the Anishinabek Nation Chief Water Commissioner.

Her outspoken activism against contaminated water on Indigenous reserves in Canada has been renowned at the United Nations. Autumn was nominated for the International Children’s Peace Prize in 2017, 2018 and 2019, where she called out governments to enforce open and honest policies about water safety.

She called out Prime Minister Justin Trudeau with his clean-water policies in a meeting she conducted, stating: “I am very unhappy with the choices you’ve made.”

Trudeau responded with promises to protect the water, but years on, the “water walker” of her people has continued her activism and holds politicians accountable for the damage caused to the indigenous community.

Driven by her identity as a Black Muslim woman fighting for the climate and racial justice, Isra Hirsi is a high school student from Minnesota.

As the Co-Founder and Co-Executive Director of the US Youth Climate Strike, Isra began her activism in high school by joining her schools environmental club.

Isra has been a long-time advocate for intersectionality and diversity within the climate justice movement, directing her school’s platform to include greater topics about decolonisation, the Global South, energy subsidy policies, and citations of Soviet Communist leader Vladimir Lenin.

As a self-acclaimed anti-capitalist, she calls for the public seizure of livestock and the “social ownership” of energy production that is managed by artificial intelligence.

Isra was awarded the Brower Youth Award, presented by the leftist environmentalist group Earth Island Institute, where she stated in her acceptance speech that she aims to force the climate strike movement to acknowledge privilege and whiteness, with her intended purpose to “disrupt white spaces”.

The 16-year-old Ugandan climate activist Leah Namugerwa is a local environmentalist in her country.

Advocating for banning unnecessary plastic to reduce waste and more since 2019 – Leah began to speak up for the environment – becoming a founder of Fridays for Future Uganda, where students conducted school strikes on Fridays, as inspired by Greta Thunberg.

Many countries, including Uganda, do not legally see the climate crisis as an issue of importance. However, many climate disasters continue to occur in this region such as mudslides and severe flooding.

Challenging this narrative about importance, Leah has accumulated support from students across the country to advocated for Uganda to fully commit to the Paris Climate Agreement.

Leading tree planting campaigns, Leah celebrated her 15th birthday by planting 200 trees rather than hosting a birthday party, to which she has continued to launch the Birthday Trees project – giving out seedlings to those who wish to celebrate their birthdays by planting trees too.

Leah said: “My first day as a climate striker looked weird to many people including my family. Passersby kept on shaking their heads wondering what had happened to me. Many people were and are still opposed to my strikes. They argue that at my age I should not be missing any day of school.”

As a leading environmental activist and feminist in India and across the world, Vandana Shiva focuses her activism on all aspects of the climate crisis and justice. This includes intellectual property rights, biodiversity, biotechnology, bioethics, and genetic engineering.

Shiva has contributed intellectually and through activist campaigns, where in the 1970s, she contributed to the Chipko movement, whose main participants were women. She also assisted grassroots organizations against genetic engineering in the Green movement across Africa, Asia, Latin America, Ireland, Switzerland, and Austria.

She received the Alternative Nobel Prize in 1993 for “placing women and ecology at the heart of the debate on modern development”, as well as started an organisation titled Navdanya, which is an Earth Centric, Women centric and Farmer led movement for the protection of Biological and cultural Diversity.

The Gandhian eco-activist and agro-ecologist has been fighting for the environment for over 40 years, where she actively challenges large multinational corporations and supports farmers who sustain ecologically safe practices.

She stated: “I don’t want to live in a world where five giant companies control our health and our food.

Known for her poetry and activism on Hawaiian culture and identity, Jamaica Heolimeleikalani Osorio is an educator with a PhD in English (Hawaiian literature) and a Master’s degree in Art and Politics, as well as a prominent activist and assistant professor for Indigenous politics at the University of Hawaii at Mānoa.

Committed to the decolonisation of Hawaii, and elsewhere, the Kanaka Maoli wahine artist sees capitalism as a root for injustice against her people. As it is ingrained in white supremacy, and is responsible for the displacement of Natives from Indigenous land, Jamaica advocates for the reduction of colonial mentality in generations to come – which she actively teaches in her role.

Her studies dive into theory on Indigenous queer feminisms, Native Hawaiian politics, and Hawaiian language and translation studies. Her teaching involves ethical forms of governance and nation building, as well as the importance of family building in retaining culture.

She has also spoken about the COVID-19 pandemic in Hawaii, and topics including global warming and rising sea levels which she spoke about during her 2013 TEDx Mānoa talk.

In an interview with Āina Momona, Jamaica said: “We have a capitalism crisis in Hawaiʻi. We have plenty of houses and units that could house every single person living in Hawaiʻi in a way that would be humanising.

“And yet, we choose to allow these units to stay empty, so that hotels and Airbnb folks can continue to make money off of their real estate. While our people, and our land suffer.”