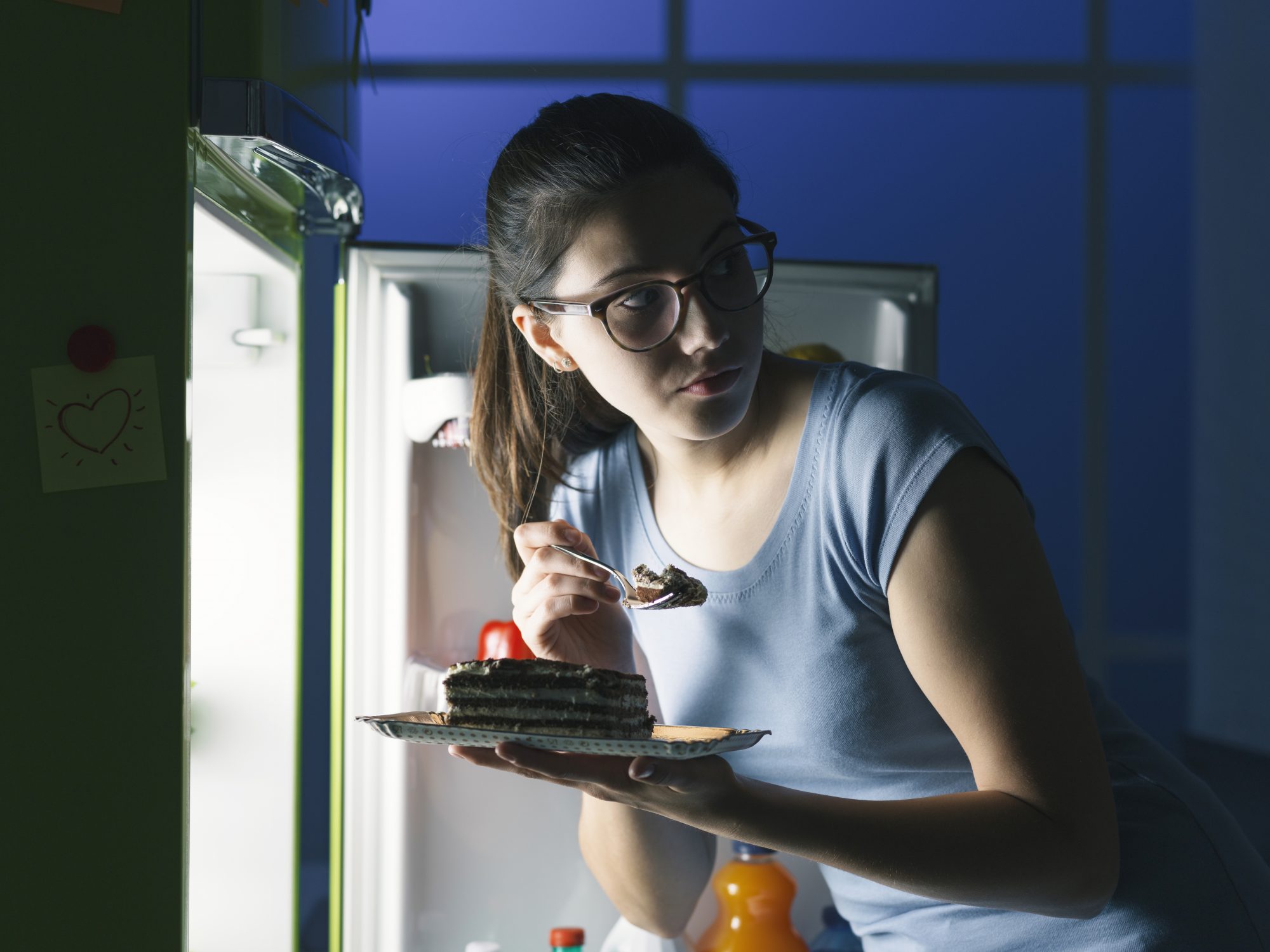 Dieticians regularly warn against eating late at night but why is this and how does it affect body weight? New research reveals all

42% of the U.S. adult population is obese. Obesity not only contributes to the onset of a range of chronic diseases, including diabetes and cancer, but it also increases our chances of becoming depressed by 55%. Therefore the stakes are high when it comes to trying to maintain a healthy weight.

A new study by investigators from Brigham and Women’s Hospital, a founding member of the Mass General Brigham healthcare system, has come up with some answers.

The researchers found that when we consume food does matter. This is because it significantly impacts our energy expenditure, appetite, and molecular pathways in adipose tissue. Their results are published in Cell Metabolism.

‘We wanted to understand why late eating increases obesity risk’

“We wanted to test the mechanisms that may explain why late eating increases obesity risk,” explained senior author Frank A. J. L. Scheer, PhD, Director of the Medical Chronobiology Program in the Brigham’s Division of Sleep and Circadian Disorders.

“Previous research by us and others had shown that late eating is associated with increased obesity risk, increased body fat, and impaired weight loss success. We wanted to understand why.”

“In this study, we asked, ‘Does the time that we eat matter when everything else is kept consistent?'” said first author Nina Vujovic, PhD, a researcher in the Medical Chronobiology Program in the Brigham’s Division of Sleep and Circadian Disorders.

“And we found that eating four hours later makes a significant difference for our hunger levels, the way we burn calories after we eat, and the way we store fat.”

How was the study conducted?

Vujovic, Scheer and their team studied 16 patients with a body mass index (BMI) in the overweight or obese range.

In the last two to three weeks before starting each of the in-laboratory protocols, participants had to maintain fixed sleep and wake schedules. Moreover, in the final three days before entering the laboratory, they strictly followed identical diets and meal schedules at home.

Once in the laboratory, study participants regularly documented their hunger and appetite, provided frequent small blood samples throughout the day, and had their body temperature and energy expenditure measured.

Investigators collected biopsies of adipose tissue from a subset of participants during laboratory testing in both the early and late eating protocols, to enable comparison of gene expression patterns/levels between these two eating conditions. This allowed them to measure how eating time affected molecular pathways involved in adipogenesis and how the body stores fat.

The results: eating late at night has profound impacts on hunger and appetite

The results came in. They revealed that eating later had profound effects, not only on hunger but the appetite-regulating hormones leptin and ghrelin, which influence our drive to eat.

Specifically, levels of the hormone leptin, which signals satiety, were decreased across the 24 hours in the late eating condition compared to the early eating conditions.

It is possible to see exactly how eating late at night increases the risk of becoming obese: these findings convey converging physiological and molecular mechanisms underlying the correlation between late eating and increased obesity risk.

Vujovic explains that these findings are not only consistent with a large body of research suggesting that eating later may increase one’s likelihood of developing obesity, but they shed new light on how this might occur.

Investigators used a randomised crossover study and tightly controlled for behavioural and environmental factors such as:

This allowed them to detect changes in the different control systems involved in energy balance, a marker of how our bodies use the food we consume.

What does the future hold for obesity studies?

In future studies, Scheer’s team want to recruit more women to increase the generalisability of their findings to a broader population.

While this study cohort included only five female participants, the study was set up to control for the menstrual phase, reducing confounding but making recruiting women more difficult.

In the future, Scheer and Vujovic are also interested in better understanding the effects of the relationship between meal time and bedtime on energy balance.

“This study shows the impact of late versus early eating. Here, we isolated these effects by controlling for confounding variables like caloric intake, physical activity, sleep, and light exposure, but in real life, many of these factors may themselves be influenced by meal timing,” concludes Scheer.

“In larger scale studies, where tight control of all these factors is not feasible, we must at least consider how other behavioral and environmental variables alter these biological pathways underlying obesity risk. “