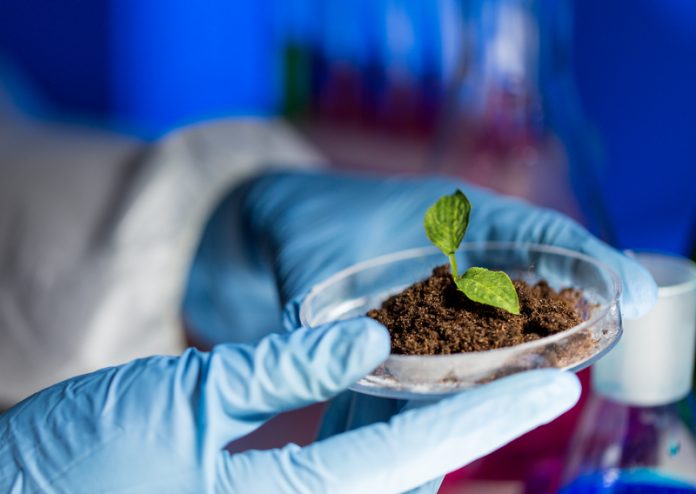 Pamela S Soltis, Director of the University of Florida’s Biodiversity Institute shares a compelling insight into the digitisation of biodiversity data

The University of Florida (UF) Biodiversity Institute was introduced in the August issue of Open Access Government. Launched in 2016 to bring together scientists, social scientists, and policy experts to address critical societal issues of the 21st century related to biodiversity, the interdisciplinary UF Biodiversity Institute is accelerating synthetic research on biological diversity to serve stakeholders in Florida (a biodiversity hotspot) and globally through efforts to understand and manage biodiversity data, develop relevant conservation, educational, and outreach programmes, and shape policy to protect and enhance environmental capital.

The UF Biodiversity Institute is exploring the world’s past and present biodiversity at all levels of the organisation, from molecules to ecosystems, and the relationship of biodiversity to climate change and to healthy and sustainable natural and human environments. Institute scientists conduct synthetic research using data from all relevant sources to address fundamental problems in biodiversity science and solve pressing societal problems. Newly synthesised knowledge from the Institute is available to individuals and organisations seeking validated biodiversity information.

The UF Biodiversity Institute benefits from strong ties to iDigBio, the U.S. national coordinating centre for digitisation of biodiversity collections – that is, the integrated database that shares biodiversity data for the nation’s natural history specimens. In this issue, we introduce iDigBio, describe the data that it serves, address how these data are being used in biodiversity science, and explain how this U.S.-sponsored resource engages with biodiversity resources worldwide.

Specimens in natural history museums – collected globally over the past four centuries and estimated at 3-4 billion specimens – document the world’s biota, including how it has changed in response to human activities and population expansion. Until recently, the world’s natural history specimens were accessible only to scientific specialists, but digitisation of these specimens is rapidly making them available to a worldwide audience.

Digitisation – that is, electronic capture of data, from label information to 2D and 3D images – began decades ago in some museums with databasing of basic information about a specimen (scientific name, collector, date of collection, locality, etc.). Through innovations in database design and usability, application of global standards for natural history collections, improved imaging methods, and the development of high-throughput workflows, the pace of digitisation has increased dramatically.

iDigBio (www.idigbio.org) was initiated in 2011 with a grant from the U.S. National Science Foundation as part of the Advancing Digitization of Bio­diversity Collections (ADBC) Program, a 10-year, $100-million commitment to ‘unlock’ the cabinets of the nation’s natural history collections. Through ADBC, data and images for millions of biological specimens are being made available in electronic format for the research community, government agencies, students, educators, and the general public. Directed by Professor Larry Page of the University of Florida’s Florida Museum of Natural History and his team (UF Professors Jose Fortes, Bruce MacFadden, and Pamela Soltis, who also directs the UF Biodiversity Institute, and Florida State University Professor Greg Riccardi), iDigBio coordinates the digitisation of U.S. natural history collections, the mobilisation of digitised data, and the aggregation of these data for a variety of uses.

iDigBio currently serves over 105 million specimen records, representing approximately 300 million of the estimated 1-2 billion specimens in U.S. collections. Media records, consisting primarily of images, but also including an acoustic collection of animal vocalisations, now number more than 22 million. Specimen records and images can be accessed through a query-driven portal and via an Application Programming Interface (API); both options offer download features for assembling large data sets of specimen information. This growing resource is driving innovations in management, analysis, and interpretation of bio­diversity data, both in the U.S. and globally, with a promise to address problems ranging from food security to invasive species to response of species to climate change. 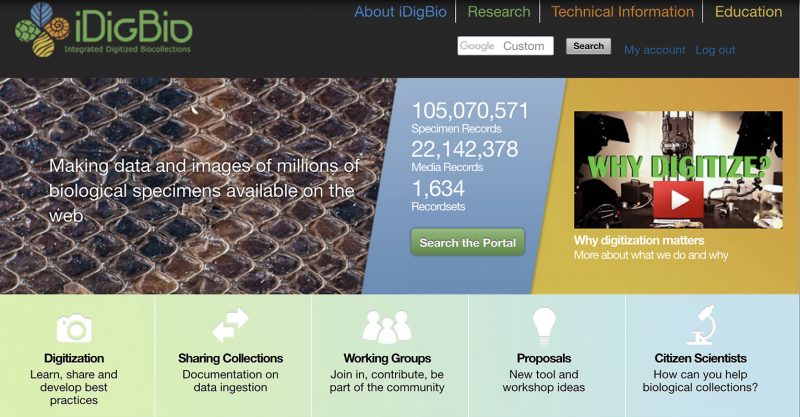 In addition to serving specimen and media records, iDigBio has developed and promoted best practices in both digitisation and mobilisation of data. Through workshops, publications, videos, and webinars, iDigBio provides workforce training and development in digitisation, data management, data analysis, and data use for students and professionals alike.

Digitised specimen data can be applied to a broad range of research questions, from species identification and distributions to shifts in flowering time associated with a changing climate, to expanding ranges of invasive species, to name a few. iDigBio scientists are developing new applications for the growing data resources, including the use of machine learning to extract information from the millions of images served by iDigBio. Research use of iDigBio data is growing rapidly, with over 100 scientific publications already in 2017, based on iDigBio data or other resources.

Likewise, iDigBio’s educational resources – from K-12 lesson plans to university teaching materials to citizen science programmes and platforms – reach learners of all ages and stages. Finally, iDigBio data have tremendous potential for conservation and management of rare and endangered species and for application in a broad range of policy issues.

Although funded by the U.S. as a repository for digitised data and images from U.S. natural history collections, iDigBio has specimen records from around the world and serves data from many international partner institutions. Moreover, iDigBio interfaces with the Global Biodiversity Information Facility (GBIF) to share data and best practices. GBIF, funded by the world’s governments, is a network of countries and organisations that share information, some of it based on natural history specimens, about where and when species have been recorded. Together, iDigBio and GBIF are working to enable global access to global biodiversity information to address a range of scientific and societal problems.

Upcoming articles in this series will focus on the role of the UF Biodiversity Institute in applying data science and informatics to biodiversity-centred problems, the need for innovative training programmes for students and practitioners to take advantage of ongoing developments in data availability and use, and case studies of how biodiversity scientists are addressing societal problems.