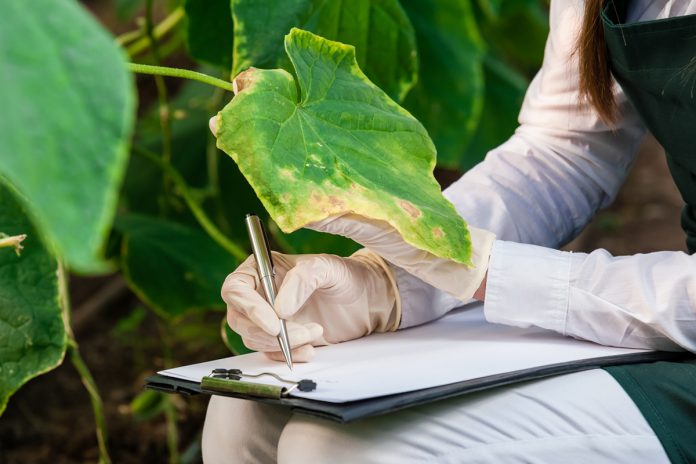 Wade Elmer of The Connecticut Agricultural Experiment Station explores the effects of nanoparticles on health, the environment, and plant disease

Recent projections have stated that global demand for food production will need to increase by 70% by 2050. Coupled with this alarming statistic is the estimation that climate changes will cause a disruption of food production cycles by extending drought events and raising average daily temperatures in many agriculturally sensitive regions. These predictions become a daunting challenge for agricultural scientists.

However, one new weapon in our arsenal is the discovery and utilisation of nanoparticles for agricultural management.

In the case of nanoparticles of CuO, we frequently found that it was more consistently associated with disease suppression. We also noted higher concentrations of Cu in the root tissues when compared to untreated plants or in plants that were treated with the bulked equivalent or the sulphate salt. The more surprising finding was that a single application to young seedlings was providing season-long benefits in enhancing yields of eggplants, tomatoes, and watermelons. The effects were more strongly observed when these plants were grown in pathogen-infested soils.

Many soil-borne diseases are caused by species of fungi and fungal-like organisms that are very hard to manage. Genetic resistance has been the best strategy, but many plants have only marginal resistance. So, the search for management tools continues. In our laboratory, we have long sought for ways to increase the availability and function of micronutrients in plant roots. These elements, although required by plants in very low concentrations for normal plant growth, play pivotal roles in maintaining plant health by fuelling important enzyme systems such as those of phenol metabolism.

We have found that the plant concentration of a micronutrient needed to overcome a deficiency symptom is often much lower than the level necessary to maintain a robust physiological defence against pathogen attack. Since these metals have relatively poor intraplant mobility and tend to be less available in neutral soils, the disease is often more severe in plants where these micronutrients have become limiting.

Can nanoparticles really make a difference? In the case of eggplants that were grown in soil infested with Verticillium dahliae, a root-infecting fungus, we noted a 17 to 31% increase in yield in 2013 and 2014 when seedlings were sprayed with a 500-ppm suspension of CuO nanoparticles (roughly 1-2 mg of CuO per seedling). If we take the average yield increase (24%) and apply that to a hectare of eggplant which, on the average, generates about 25,000 kg, we predict about 6,000 kg increase per hectare. At the wholesale price of roughly $0.90 (US) per kg of fruit, this boost profits by $5,400 per hectare. More importantly, this yield increase was achieved without the additional cost of cultivating new land with added chemical inputs. All of this was obtained following a single application of nanoparticles of CuO to young transplants that may cost as little as $20 US.

What about toxicity to humans and danger the environment? When we analysed these eggplant fruits for elemental content, we found no more Cu in the fruits that were treated with the nanoparticles than in fruits from untreated plants, suggesting the nanoparticles or the active ions of the metals did not translocate to the edible portions. The same effect was observed with tomatoes and watermelons. Likewise, inasmuch as very small seedlings are being exposed to the nanoparticles, we minimised environmental exposure.

So, what is happening? Why would such as small amount of nanoparticles have such lasting effects? We are currently testing the hypothesis on different plants that Cu, although sufficient in most soils to prevent foliar deficiency symptoms, is limiting when it comes to early-season root infections by pathogens. Copper serves as a cofactor for the synthesis of important defence products in plants that help protect roots from pathogens. These defence products are quickly manufactured in response to pathogenic infection.

One particular enzyme of interest is polyphenol oxidase. This enzyme produces antifungal phenolic barriers in root cells. The activity of polyphenol oxidase enzymes is increased many fold in the presence of Cu ions when the plant is being attacked by a pathogen. These defence reactions are broad spectrum and may protect plants against a wide array of pathogens. On watermelon, transcriptomic analysis of root RNA revealed the polyphenol oxidase enzyme was upregulated between 9 to 29 times more when treated with nanoparticles of CuO and then exposed to the pathogen.

Our laboratory and that of Dr Jason White of the Department of Analytical Chemistry at The Connecticut Agricultural Experiment Station is currently partnering with other chemistry laboratories, to determine how these particles move in plants when applied foliarly. A basic question remains as to whether or not the nanoparticle itself enters into the plant and distributes or if the nanoparticles stay in the cuticle and in adjacent tissues, and then continually releases ions into the plants.

It is exciting to see how a manipulation of mineral nutrition using nanoparticles can have such a marked effect on growth and yield. The future of using nanoparticles in fertilisation appears extremely promising. Chemists have and will continue to play a major role in developing new nanoparticle composites that could deliver multiple nutrients. Formulation chemistry will also need to be advanced to overcome the propensity of these nanomaterials aggregating into much larger and less active particles. While these issues are being addressed, we will continue to work to better understand the interaction between the different forms of micronutrient nanoparticles, the plant, and the wide array of plant pathogens that attack them.

Chief Scientist of the Department of Plant Pathology and Ecology