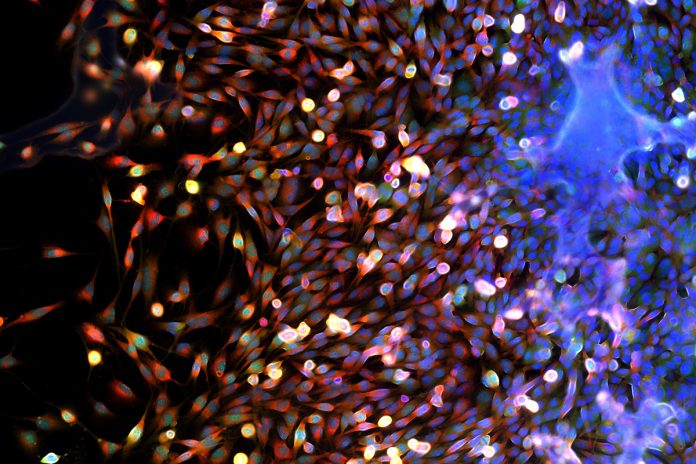 Cancer progression, meaning the evolution of localised tumour growth to an invasion of adjacent tissue and dissemination to distant organs is a complex process that is intimately related to interactions between tumour cells and the host tissue stroma, which includes the extracellular matrix (ECM) and a broad panel of cell types.

Cancer growth invariably triggers an inflammatory response intermingled with tissue remodelling and regeneration, all of which mimic wound healing – leading to the notion coined by Harold Dvorak in 1986 that cancer is “a wound that never heals”. In adult epithelial malignancies, or carcinomas, tumour-host interactions are an intensely investigated field and it is well established that the stromal, “wound healing” response to cancer progression conditions both local growth, helping sustain cancer cell survival, as well as dissemination.

In sarcomas, the nature and effects of the interactions with the host tissue stroma are largely unexplored. Given that sarcomas are, in a sense, a malignant stroma, the obvious question is to what extent the normal stroma contributes to sarcoma growth, invasion and dissemination. Histological analysis shows that, like carcinomas, paediatric sarcomas display variable degrees of infiltration by a variety of leukocyte subtypes.

However, the mutual influence between sarcoma cells and the infiltrating leukocytes remains obscure and requires elucidation. Carcinoma cells induce the host tissue stroma to secrete factors that are directly or indirectly beneficial to the tumour cells. Thus, the tumour cells alone may not secrete a broad repertoire of cytokines and proteolytic enzymes that may provide them with optimal growth conditions and break down physical barriers that limit their migration.

However, they can recruit and activate host tissue cells, including a variety of leukocyte subsets, mesenchymal stem cells and fibroblasts, which can produce a plethora of cytokines and enzymes. Many of the cytokines promote tumour cell survival and growth and help maintain tumour cell plasticity. The proteolytic enzymes may remodel the surrounding host tissue, liberating growth factors that are normally sequestered within the ECM and creating a path for tumour cells to migrate along. Sarcoma cells are naturally motile and produce a variety of proteolytic enzymes themselves.

It is therefore unclear whether and to what extent they require the intervention of the host tissue stroma to divide and disseminate. What is also unknown is the relationship of sarcoma cells and the immune system. A great deal of effort has been committed toward understanding how the immune system responds to cancer growth and how cancer cells defend themselves from immune aggression. The hope is that by boosting the immune response in a variety of ways, cancer progression and growth may be blunted or even reversed.

Although spectacular results have been obtained in some cancer types, the immune response to paediatric sarcomas and their mechanisms of defence remain to be fully explored. Tumour-host interactions in paediatric sarcomas are therefore a promising and important field of study.

Metastasis is responsible for 90% of cancer–related death. Sarcomas typically display high metastatic proclivity, which renders their prognosis particularly poor, as metastases are for the most part unresponsive to conventional chemotherapy, even if a primary tumour displays sensitivity. Most of our understanding of the multistep process, which constitutes metastasis, comes from studies on carcinomas.

Interestingly, carcinomas mimic the sarcoma phenotype to metastasize. Most disseminating carcinoma cells undergo epithelial-to-mesenchymal transition (EMT), a reversible process by which they transiently adopt a variable mesenchymal phenotype. EMT appears to be critical for carcinoma cell motility, as epithelial cells are typically non-motile, invasion, and possibly other steps leading up to secondary colony formation.

Once they have reached their final destination, disseminated carcinoma cells revert to their epithelial phenotype to grow and form metastatic tumours. Being of mesenchymal origin, sarcoma cells are naturally motile and probably possess all the properties necessary for dissemination. They, therefore, do not need to undergo any particular phenotypic changes and provide ideal cells to study metastasis and determine how the metastatic lesions may differ from the primary tumours.

An age-old issue that remains unresolved is that whereas carcinomas typically disseminate by the lymphatics first and later by blood vessels, sarcomas tend to disseminate by the blood and relatively seldom by the lymphatic vessels. The reasons for this difference in dissemination route is unclear but it points to basic biological differences between carcinoma and sarcoma cells that have therapeutic relevance.

A major focus of metastasis research in recent years has been the isolation and characterisation of circulating tumour cells (CTCs). Once again, circulating carcinoma cells have attracted the greatest attention and it has been demonstrated that CTCs display variable EMT and that EMT generally correlates with resistance to therapy.

Key additional questions to address include the intrinsic properties of paediatric sarcoma metastatic cells, particularly epigenetic modifications that provide them with the ability to disseminate and form secondary colonies; and the effect that disseminated cancer cell growth may have on it host tissue, which may differ from that exerted by a primary tumour on its microenvironment. It is possible and in fact likely, that metastatic tumour resistance to therapy is due to a combination of a tumour cell-intrinsic properties and elements within the host tissue response. As metastases herald resistance to therapy and, in the vast majority of cases, incurable disease, these issues need to be given high priority in paediatric cancer research.