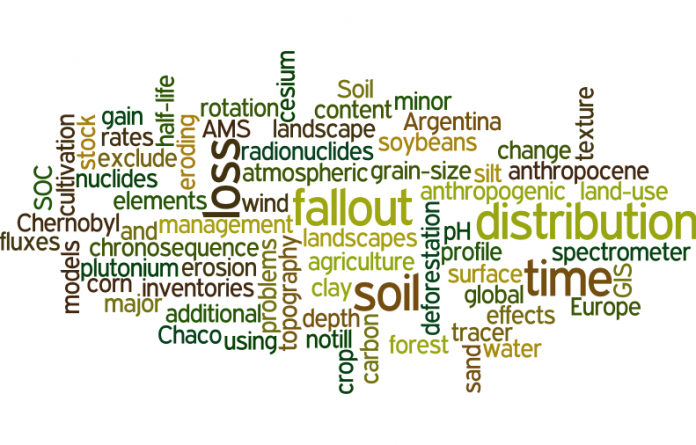 What can cosmogenic nuclides tell us about the earth’s surface? Prof. Dr. Dunai of The Institute of Geology and Mineralogy, University of Cologne explains

How many years can a mountain exist before it’s washed to the sea? More than 50 years after Bob Dylan asked this simple question it can finally be answered with some confidence. Modern techniques in Earth surface sciences allow us to determine rates of change and decay of the Earth’s surface with an unprecedented accuracy. Amongst these techniques, the application of cosmogenic nuclides has acquired a unique position.

Cosmogenic nuclides are continuously produced in the Earth’s surface by high-energy cosmic particles. Since the production of these nuclides decreases rapidly with depth below the surface, their cumulative concentration in any surface material is sensitive to its erosion history. In those cases where significant erosion is absent, the cumulative concentration is a function of the duration of exposure to cosmic rays. It is this unique sensitivity that is used for many Earth science applications: either for determination of mass-loss in the case of eroding surfaces (e.g. Bob Dylan’s mountain), or exposure dating in the case of stable surfaces.

Critical information on the state and evolution of the Earth’s surface can be obtained utilising cosmogenic nuclides:

The exceedingly low abundance of cosmogenic nuclides in the Earth surface (typically several thousand to a few million atoms per gram of material; for illustration: one gram of rock contains in the order of 1022 atoms of any kind) requires specialised, large-scale research infrastructure to determine their concentration accurately. The majority of measurements are conducted by accelerator mass spectrometry (AMS), a subset by noble-gas mass spectrometry (NG-MS). Depending on the query, specific cosmogenic nuclides are particularity suited; rendering a range of nuclides useful (3He, 10Be, 14C, 21Ne, 26Al, 36Cl, 53Mn).

Being able to choose the most suitable nuclide for a specific scientific task is therefore important. In practice, however, this choice is commonly limited by availability or access. Only analyses of 10Be, 26Al, 36Cl are routinely accessible to non-specialists, limiting the scope of the methodology.

As a result of this substantial joint investment and the unique collaboration between geoscientists and nuclear physicists at Cologne, and at international partner institutions (ANU-Canberra, ETH-Zürich;, PSI-Villingen, SUERC and East Kilbride), the full range of cosmogenic nuclides will soon be available for Earth surface sciences at one point of access. Pertinent science no longer will be limited to what is accessible but can rely on what is best suited. Many collaborative international research projects already rely on our facilities.

Ongoing applied projects mostly centre on the question of how does the presence or absence of vegetation – as a result of climatic conditions or human interference – affect soil erosion. We approach this complex subject over decadal (utilising fall-out plutonium in agricultural areas), millennial to million year time-scales (cosmogenic nuclides in natural environments).

On the short time-scales we study the effects of turning semi-arid savanna (in South Africa) or pampa (in Argentina) into cropland. On one side our results show that these fresh agricultural areas are prone to significant erosion by wind (up to 50% loss of the fertile soil size-fraction in less than 20 years). On the other side they indicate that adaptive agricultural methods (such as no-till farming) can largely reduce the impact of wind erosion, providing valuable informing on improved land management practices.

On the long to very long time scales our research currently focuses on semi-arid to hyper-arid environments of the Atacama Desert and adjacent areas in Chile. In the framework of the DFG-funded coordinated research center ‘Earth – Evolution at the dry limit’ (SFB/CRC 1211, first funding phase 7/2016 – 6/2020), we quantify erosion in the absence of macroscopic plant cover, and the long-term response of the landscape on the emergence of ephemeral/permanent vegetation. Early results indicate that permanent vegetation cover, or the episodic removal of it, has quantifiable and profound long-term effects on landscape evolution.

Motivation to conduct this research is the realisation that all terrestrial life ultimately depends on soil. We need to know about the rates and processes soils are naturally removed and replenished, and how human activity alters this critical zone for life, and we have now the tools to perform this research.