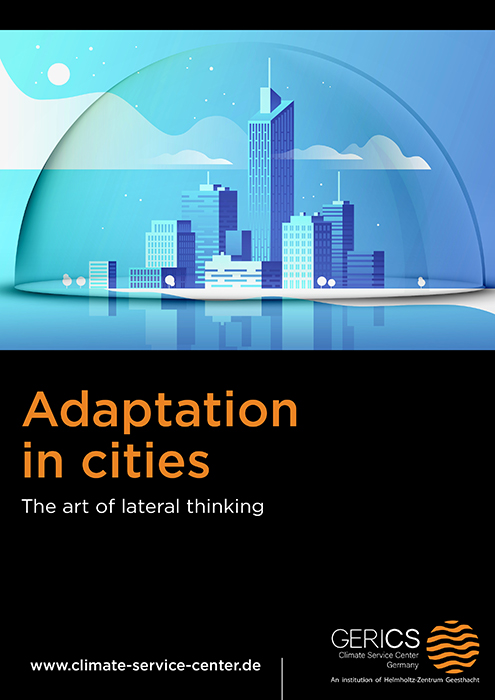 Apl Prof. Dr Steffen Bender and Dr Markus Groth from Climate Service Centre Germany (GERICS) reveal their thoughts on how to succeed in climate adaptation at the city level, including the art of lateral thinking where this is concerned

How the adaptation of urban areas and their surroundings requires the consideration of many factors and drivers, including their interactions, is the subject of this in-depth analysis by the Climate Service Centre Germany (GERICS).

Before the development of an individual adaptation strategy for a city, a number of steps have to be kept in mind we are told, for example, prior to entering the planning phase of adaptation it is necessary to understand the whole system. This “includes the knowledge of the most important drivers – including not only climatic but also non-climatic drivers such as new socio-economic trends or land-use change.”

The authors go on to explain that their experience concerning climate change impacts and associated adaptation measures in cities reveal the necessity for a flexible tool that addresses a whole range of actions. GERICS’ innovative toolkit concept, of course, addresses this, a concept which was and is currently being tested in a number of cities, ranging from small municipalities to state capitals. The authors are keen to explain this point further: “The locations are all over Germany including cities on the sea as well as densely populated areas inland. The main goal of our activities in all cases is the support of adaptation processes.”

In addition, the authors point out that although effective adaptation measures are known, such as the preservation and expansion of green areas and water elements or the use of climate-sensitive construction materials, there is often still a gap between the approaches in theory and in practice, owing to administrative barriers and a lack of understanding.

Another area explored concerns a growing urban population and demographic change, which are two important challenges for cities of the future, we are told. We discover that growing cities need free space for further building activities, but this is becoming increasingly rare. One insight given in this vein is that each new building reduces the green spaces that are vital for “the urban climate, biodiversity, recovery, retention of precipitation, the maintenance of fresh air corridors, or the reduction of the urban heat island.”

Looking ahead, consider the thought that by the middle of this century, the majority of people dwelling in major cities will have to adjust to an increase in the annual average temperature and a greater number of summer days, tropical nights and heat days. Having said this, it is good to know that climate-friendly and climate-adapted urban planning provides inhabitants with the opportunity to reduce the negative effects of climate change on the urban climate and “to influence the inner-city microclimate in such a way that overheating can be reduced.”

I hope you enjoy reading these and many other fascinating insights that this analysis offers around climate adaption in cities today.